It’s our pleasure to announce the promotion of Daniel Grube to Area Manager for Ag Resource Management’s Richland office. 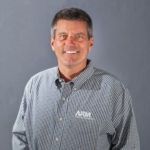 Dan is a graduate of the University of Toledo, and went on to work in community, business and middle-market banking as an ag lender until joining the ARM team two and a half years ago. He grew up on a family farm which is owned an operated by his brother to this day. Dan enjoys being part of the ARM team because he gets to stay close to his first love in life—farming. He says, “My first love was farming, but I think I enjoy ag lending more now because I can do more with it, and the people I get to meet and work with is so vast now.  We’re helping farmers and agribusinesses flourish—not just in my home state of Ohio or where I work in Michigan, but nationally.”

Grube has held a few different responsibilities during his tenure at ARM thus far.  He came on board in a Senior Loan Officer role supporting three locations. When he transitioned to the Relationship Manager role in the fall of 2018, Dan started spending much of his time in Richland and ultimately supporting 100% of the Richland efforts starting in the fall of 2019. His energy, relationships and commitment to the ARM model will serve him well in his new role.  Dan’s leadership and skill set will allow for a smooth transition and we look forward to his continued success in his new role.

We use cookies to ensure that we give you the best experience on our website. If you continue to use this site we will assume that you are happy with it.OkPrivacy policy